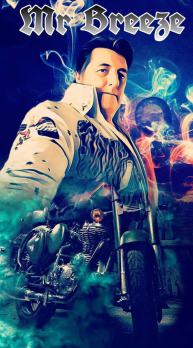 In 1973, when I was a mere 4 year old, living in Australia, I was watching a man on TV wearing a white rhinestone suit, singing to the world from Hawaii. I turned to my mum and said 'that's what I want to be when I grow up'.  I've been trying ever since.  That man was Elvis, the show Aloha From Hawaii.  Fast forward a few years and we are back living in England, and I am now an 18 year old, living with my new girlfriend (soon to be wife), and she encourages me to join a local Rock band, covering 70's 80's rock music, from Guns and roses to Lynyrd Skynyrd.  However, after subsequent rock covers bands, Rock and Roll bands and such, I found I was being compared to, and sounded like Elvis. So, in 1998 I entered the Best Singer of An Elvis song contest.....and WON! Wow. Since then I have been in various bands, and performing solo.  Exclusively solo since 2009.
Today, after a short hiatus, I perform music from Elvis and the rock and roll greats, to Meatloaf, The Blues Brothers and through to Lynyrd Skynyrd and more.  Covering various genres of music including Rock and Roll, Rock, Americana and Blues.  I am flexible in my musical approach, being able to adapt to what the audience requires from me at the time.