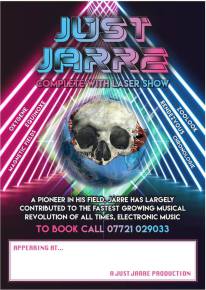 Just Jarre is truly a representation of Jarre while they may not have all the lasers their own interpretation of Jarre with their own laser show is without one of the best light shows bought to the stage by a tribute Act.

Just Jarre celebrate the work of electronic music pioneer Jean-Michel Jarre, whose worldwide hit albums such as Oxygene, Equinoxe, and Magnetic Fields have sold more than 80 million copies. Jarre also conceived a brand-new format for performances; bringing his music and vision outdoors to the masses with stunning laser displays. Just Jarre bring his music to life with their own laser show and are one of the best light shows brought to the stage by a tribute act.